You are here: Home > Rationale 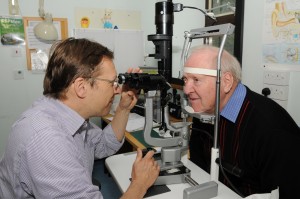 Age-related macular degeneration (AMD) is the commonest cause of irreversible visual loss in the western world. An estimated 5 million people in the United States and Europe have advanced AMD. A recent report based on the Bridlington Study of 2003-6 estimated 4.6% of that population of 65 years or older had advanced AMD. In participants aged 80-84 years advanced AMD (wet and dry forms of AMD) occurred in 7.3%; this increased to 15.9% in those aged 85 years. However, as the population (UK and elsewhere) continues to age, AMD will become more common. It is now accepted that AMD occurs as a result of interactions between genetic and environmental factors (such as smoking). It has been suggested that response to the commonly used treatments for wet AMD (injections into the eye) of ‘anti-VEGF drugs’ e.g. ranibizumab (Lucentis, Novartis), aflibercept (Eylea, Bayer) and bevacizumab (Avastin, Roche/Genetech) may depend on genetic differences such that some genes prevent good response to these drugs.

It is important therefore to determine the frequency of different stages of AMD in the UK population, as well as understand the different risks that lead to the condition. In addition, factors that may affect outcomes to current and future treatments, including variations in our genetic profiles need to be investigated. This will help us project the frequency of occurrence, and genetic variations of AMD in the UK.

We plan to assess the back of the eye (the retina) by taking photographs and photo-scans of all residents in Bridlington aged 55 years and older in order to determine the frequency of the different forms/stages of AMD in the population.

Benefits: This study will fulfil the major need of accurately determining the frequency of AMD, and factors that predispose to these (including genes and the environmental factors) in anticipation of potential new treatments, including those for previously untreatable early stages of AMD. Our findings will allow personalisation of the treatments recommended/given in nAMD for maximum patient benefit.